For almost a year after college I backpacked around Australia. By no means was it glamorous, but it was life changing…more than I ever could have imagined.

I grew up in a tiny country town on the Canadian border of New York State that was limiting but friendly and safe and a good place to call home. I attended a private university near home with students from all over the country and all over the world that had made me curious what else was out there. As graduation approached I had found a program that would help me get a work visa to another country to find work to help pay for travel along the way. This program offered assistance to travel to many countries, usually for a few months at a time. In the fine print I read that for Australia they only accept 100 Americans a year, you must be a recent college graduate and the visa was good for a year. I thought, “if I can go this far away from home for this long….by myself….I can do anything.”

I bought an open-ended ticket, had a garage sale to sell everything I owned, which wasn’t much just out of college, and the day after my 22nd birthday I was off on an adventure using my passport for the first time ever…… by myself.

It was a year of ups and downs, for sure. I hadn’t counted on the downs, but it taught me to navigate things on my own. 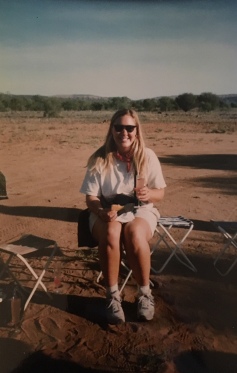 Thru homesickness and illness and a dangerous case of sun poisoning and multiple bug infestations….I also got mugged the week before I arrived home.  But those are stories for another day as I didn’t let them define this experience for me. Despite the memorable not-so-nice moments it was exciting to be that far away from home. I often stopped and thought about where I was on a map and what it took to get there.  Back then it was unusual for people to meet an American traveling solo. I heard it all the time. They were known for traveling in packs and being there on student visas, and being quite, well…obnoxious. Thus the term “Obnoxious American”. I had a Working Holiday Visa which is what backpackers from Commonwealth countries reciprocate.  Because of where I grew up I probably sounded Canadian to most. I had to insist that I was, indeed, a solo 20-something female American backpacker, hopefully not obnoxious, as I was quite shy.

During the work week I lived in a youth hostel in Melbourne and worked temp jobs so I could be around other travelers. It was there that wanderlust kicked in as you shared meals with new friends staring at the world map on the wall dreaming about where you wanted to go and the route you wanted to take to get there and hearing stories about where others had been. We had going away parties every time a long-termer left us and you never knew if you would see them again.

On the weekends- and sometimes for longer stretches- I found a job as a nanny. Little did I know that I would form an unbreakable bond and they would remain my second family for life.

They were in the horse racing business and lead me on an adventure I never could have planned on my own.  Horse farms, the races, the stables, family, lots and lots of family, and while I was there they brought a black lab puppy home and named him Oscar. They even won the Melbourne Cup horse race that year, not that I knew what that was, but I could feel the excitement in the entire country for this race, so I knew it was something special and I just happened to fall into the middle of it all, purely by chance. I got to spend time going to fairy parties, sitting on mushrooms watching kids dressed as pixies and eating this sugar sprinkles and butter sandwich they called “fairy bread” but I also got to spend time with the kids’ grandmother at their horse farm, which gave me all the feels of home. 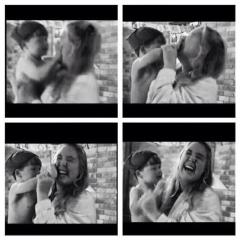 I spent a considerable amount of time with the kids’ cousins and aunts and uncles, the family friends all knew me, all of which made me feel very…. well, local. Because they made me feel so included this was starting to feel like my second home. I introduced the kids to Jimmy Buffet songs and we had dance parties and they could mimic my American accent even though they didn’t understand how far away I lived. I cried for the two weeks leading up to saying good bye when I went back to the US, and I promised to come back.

And while I based myself in Melbourne, I hopped on a bus and meandered my way up the east coast and then down the middle of this vast, empty country, living the poor, starving backpacker life I had come for.  It did not disappoint.

I met friends on the beach, in bars, on the bus, on the train, in hostels, on tours, on boats, on the side of the highway when my bus caught on fire…. Sometimes we met briefly, had a lot of laughs and didn’t even know names before we parted ways. Sometimes I just sat behind the bus driver and chatted with him. I managed to meet people wherever I went. I had to…I was alone. Back then there was no social media to instantly keep in touch, there was barely email. I wrote letters and postcards home and bought phone cards that ticked away two dollars per minute when I called home.

Photos were on film and I didn’t see any of them before this adventure was over, hoping they turned out ok. I bought postcards at each stop so I could remember it, just in case my photos didn’t turn out. This was all good for me, because I wanted to meet new people because I was learning so much about Australia and the world. I was also learning so much about myself. 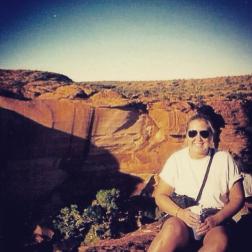 This year set the tone for the rest of my adult life. I learned how to talk to strangers, how to navigate cities and a huge country, I learned to take risks. Most of all, I learned to do it on my own. I didn’t want to wait around for someone else to have the time or money or interest in going with me, much the way I have traveled ever since this year. I learned how to be alone, eat alone, be alone with my thoughts, entertain myself, make friends. It was pivotal for what was to come in life.

One thing I realized on this trip at age 22 was I hadn’t seen enough of my own country when people asked me about being from America, which was just as big as Australia, but with less empty parts to it. I decided if I was going to travel the world I must see my own country, too.

So that is exactly what I did.

9 thoughts on “Learning to Fly Solo”